At the end of their first year, MIT students declare their Course (aka major). At the end of my first year – and to some extent, even now as a Junior – I was still unsure.

I was talking to my friends in BioMakers exec recently about how they chose their courses. Here’s what they said (edited for format and clarity).

Melody: I think the main reason I chose bioengineering is because it felt exciting and at the intersection of a lot of my interests. I enjoyed learning about biology and thinking about all that we could do with it, and particularly with engineering the goal is to think about how to tune and understand something. As Feynman said, “What I cannot create, I do not understand.” I think that bioengineering was like that for me: realizing that I could really easily get soaked in thinking about all that life is and the world is. But I really wanted to know how things worked, how things were built and how I could translate that to research I want to do and see it in the hands of people being used.

Honestly, iGEM (which I was part of a team in both high school and at MIT) definitely was one part of it, but there’s a lot I’m thinking about now. Obviously, there’s no one right major though, and you can end up anywhere even after choosing a major. I definitely think it’s also cool to think through different scales which is also bioengineering. You can engineer DNA, proteins, cells, biofilms / cell communities, tissues, organs, etc. At the same time, I think going into bioengineering there is an expectation to work with other people who work at different scales and in different fields. That was both appealing and exciting but also a challenge for me— how do you communicate with people speaking different languages but working on different aspects of the problem?

Ultimately though—I know I made decisions for what I felt was right at the time though I’m not quite sure what lies further down this path. Perhaps this uncertainty is a part of science and life though—stepping into the unknown while knowing just a little.

I don’t think I’ve ever strongly aligned with any major at MIT. Low key, 2A is that sort of major where that is fine. I spent my first two years doing a variety of UROPs (photonics, to DIY medtech, to speculative design, to spacetech) in any field that piqued my interests. I would realize what I liked and took classes based on what skills I wanted to get stronger at (electronics, design thinking, policy, etc). So here I am now with a 2A-20 and 4B. I think I’m finally at a point where everything is converging and the result is that I am in majors and fields that seem disjointed at first, but work well in the context of the work I am interested in doing.

I don’t feel super in tune with much of course 20’s biomedical research interests because sometimes I feel like humans are almost removed from the research process. I think I do want to work to improve human health directly, on the everyday scale. It’s crazy to me that we’ve only been able to scratch the surface of knowing what goes on inside of us or in our dog or the plant we water every morning. Then, the fact that biotech lets us be able to change the way human lives were written to be read is such a paradigm shift that blows my mind. I think course 20 engages with this, often with different perspectives/backgrounds, so I picked it. To me, the interaction of humans and their paradigms of life/health in the everyday kinda manifest itself as food and design right now—so they are where I’m trying to point my major towards at the moment.

In terms of majors, I personally was not very invested in any particular area prior to MIT, but had a vague interest in biological engineering particularly with regards to healthcare devices/applications. I suppose my experiences throughout hasn’t indicated that it’s a poor fit. But personally I’ve become less interested in the technical aspects as time goes on (course 20 tends to be pretty heavy on that) and want to do more in the public/health policy side of things. Hence, I am minoring in international studies trying to focus on policies and related topics. Truthfully I don’t think I would be particularly unhappy with any major, and it just so happened that I stuck with BE during my time here.

Coming to MIT, I knew I wanted to do something with biology. It seemed like an obvious choice; someone interested in biology should declare biology or biological engineering (duh). But the more I learned about different courses, the more confused I got. I took a fairly wide range of classes, trying to figure out what I should declare. In hindsight though, these classes didn’t help me decide a major so much as told me what kinds of things I wanted. Here are the most important ones to my decision.

12.12 and 12.409: Nature’s Sandbox: The History of Ancient Environments, Climate, and Life and Hands-on Astronomy, respectively. As their names imply, these classes introduced me to the concept of fieldwork in geology and in astronomy, and brought me out on trips to gather data and interpret features that already existed in the world. Together we learned about how looking at the patterns of odd stones in otherwise smooth sedimentary layers indicated the presence of a glacier melting and dropping stones from many miles away into calm water, or how what seemed like a single star was actually two orbiting around each other. More broadly, these classes taught me that I liked science – the process of figuring out how and why things are the way they are – and that I liked being in the field.

7.016: Introductory Biology: This version of Introductory Biology focused on chemical biology and touched upon using molecular genetics and biological engineering for human health. It was also a much smaller class than the more popular 7.012, so I had a better chance of getting to know the professors. This class reinforced my love for biology and gave me a glimpse of what it meant to bioengineer and design biological systems.

1.089: Earth’s Microbiomes/Environmental Microbiology: This class introduced me to a slightly larger scale concept of biology; the interactions of many species of microbes to create a community effect. Though I appreciated the molecular view from my intro class, I found myself getting more excited with this larger scale biology.

I made many courseroads about what to do – I was considering any combination of Course 7 major, Course 20 major, Course 12 major/minor, Environment and Sustainability minor, and a Course 1 major/minor. In short, anyone (including myself) looking at my eight course roads would probably end up pretty confused. (I’ll attach them at the end of this post!)

One of the biggest impacts however, was a simple message from upperclassmen in my dorm, echoed by my advisor; in the end, it doesn’t matter the name of your major, but the skills you’ve picked up on the way. So, I took a harder look at the classes that each major required, keeping in mind that just because I declared one major didn’t mean I couldn’t take whichever classes seemed interesting.

Looking at the class requirements, not all of Course 20’s classes seemed particularly interesting to me, especially as a person who felt more aligned with basic science at the time rather than engineering. I ended up sticking to Course 7, figuring that with the flexibility Course 7 offered, I could pick and choose whichever classes seemed interesting to me from Course 20. That is still where I am today, more or less.

Currently, I am still unsure about how I fit in tune with 7 – I do generally like the basic science focus, but it can be a bit tricky to work mostly in molecular biology when my interests align more closely with larger scale biology (which interestingly, aligns more with 12 and 1). I enjoy being in the lab well enough, but after a summer of nothing but lab for 40 hours a week I realized I’d really like to be in a field with field research, like plant biology with field trials or oceanography. It’s a bit tricky to find opportunities for plant science at MIT though, though there is plenty of oceanography with the MIT-WHOI joint program. Sometimes I wonder if doing a more quantitative background with course 20 will help me more because of more flexibility, but I like the connection with ecology and non-medical applications. Given my stated interests, I have a very interesting resume – it’s gotten more and more computational and less focused on ecosystem biology. I don’t regret that. More molecular and BE techniques are moving into these fields, so it’ll be great to have that background. It’s just that if the high school version of me had been given a copy of my resume from today, I imagine she would have been pretty confused. I did the best with what I knew at the moment.

Ultimately, I return back to what I was told as a confused frosh, taking classes that interest me or I think would be useful with less of a regard for requirements now that I have the flexibility to do so with my Course 7 major. I now follow a path on what I think would best fit my interests, gathering information from calling alumni in positions I aspire to be in one day, talking to professors for my favorite classes, and going to plenty of industry talks and asking questions with the First Generation and Low Income guidance community.

I supposed courses, in the end, are not meant to be much of a perfect fit. I’ve tailored my own path based on what makes me happy and from where I think things will go and will help me in the future.

Though there’s still some uncertainty (and I think there will always be some) – I think I am satisfied with where I am.

My very first complete courseroad! Almost none of this is still accurate.

I briefly flirted with the idea of having a double major in 7 and 20.

Finally I decided to stick to Course 7. Also, four classes a semester is a much more reasonable time.

Conversations with several alum and looking at what research methods were emerging in the latest journal articles. led to new courseroads and another evaluation on what classes I really wanted to take. I certainly gained a better appreciation for the importance of computer skills in biology due to COVID; so I’ve added some classes there since I would be unable to take lab classes since I would not be on campus for all of junior year. 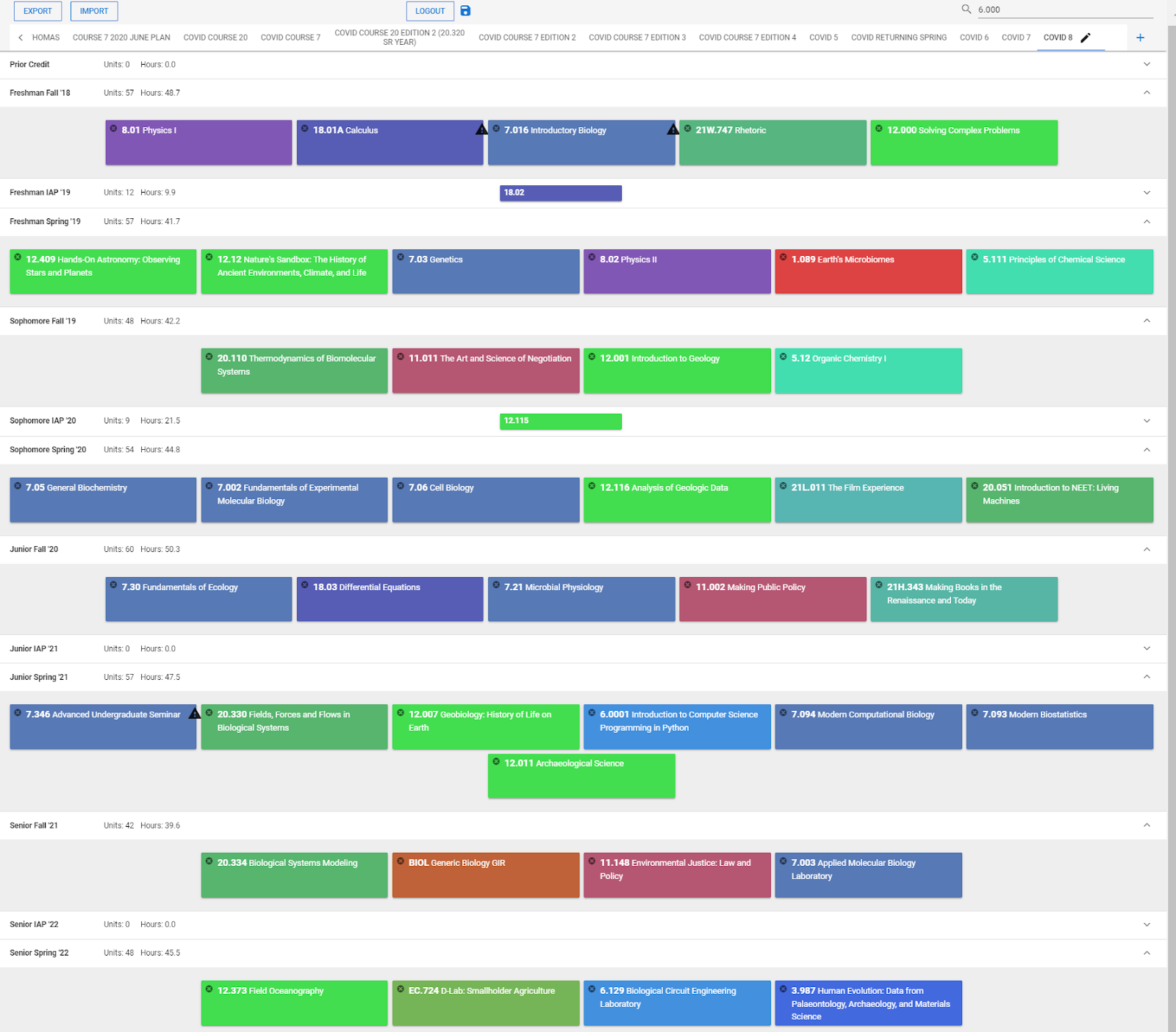 My most recent courseroad. Note the addition of quite a few covid editions. (The Biology GIR is a placeholder for a cross registered Harvard class, OEB 137: Experimental Design and Statistics for Ecology).